SOURCE gets up-close and personal with T.R.E. 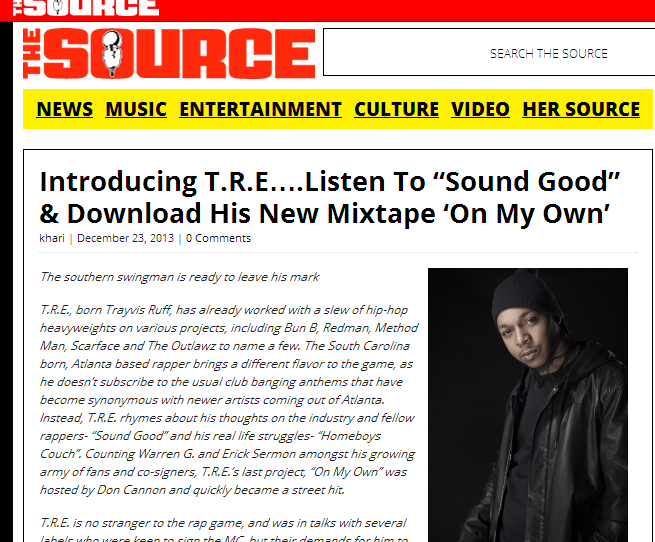 The southern swingman is ready to leave his mark

T.R.E., born Trayvis Ruff, has already worked with a slew of hip-hop heavyweights on various projects, including Bun B, Redman, Method Man, Scarface and The Outlawz to name a few. The South Carolina born, Atlanta based rapper brings a different flavor to the game, as he doesn’t subscribe to the usual club banging anthems that have become synonymous with newer artists coming out of Atlanta. Instead, T.R.E. rhymes about his thoughts on the industry and fellow rappers- “Sound Good” and his real life struggles- “Homeboys Couch”. Counting Warren G. and Erick Sermon amongst his growing army of fans and co-signers, T.R.E.’s last project, “On My Own” was hosted by Don Cannon and quickly became a street hit.

T.R.E. is no stranger to the rap game, and was in talks with several labels who were keen to sign the MC, but their demands for him to change his sound left T.R.E. frustrated, resulting in him launching his own label- Ruff Draffs. In conjunction with Nico Solis of Crown Kingz Productions (CKP) – a production team-turned-record label, T.R.E. is gearing up for the release of his second mixtape “No Options” at the top of 2014.

T.R.E. was born in South Carolina, raised in D.C. & is currently based in hip-hop hotbed Atlanta. Its easy enough to imagine the amount of influences T.R.E. has musically, and to top it off, has admittedly been swayed by Warren G. & Erick Sermon. Check out his single above, and download his mixtape below.